A meeting of worlds. From expressive, two dimensional, abstract yet fantastical paintings to a dramatic 3 dimensioned planet around which the paintings revolve. 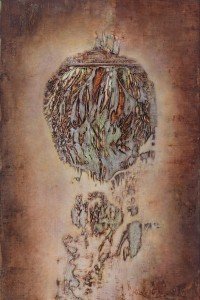 Within Chintan Bolliger’s current series, Life. Forms, the human figure is gone. Deciding she no longer wished to be tethered to the figure, which functioned as way to establish forms within her paintings, she has relinquished the face-less enigmatic bodies in her new work.

Bolliger now takes her cues from Nature. During walks, she pays attention to environmental, geological and biological formations. Her interaction with nature leads to multiple perspectives in her work: unfamiliar entities, ambient terrains, primordial details and microscopic views that create a sense of dislocation, drawing us to a physical, nameless, placeless place.

”I am attached to the idea of something indefinable; a contact of reality/perception/imagination.”

In ‘Streaming’ we are able to see the banks of a bog-like terrain-“an ecosystem”- with its mossy kelp-like structures of teal, green and coral reds situated along grey tributaries. ‘Earth Born’ shows a primordial, inchoate orb suspended in space – a new planetary-like organism starting from a cosmic happenstance. “This new series is a consideration of my relationship to the natural world and what it means to be alive. Awareness lies somewhere on the boundary between the landscape we walk through daily and the alternative environment of the imagination.”

Bolliger’s work alludes to nature but serves to displace.

Surfaces of Bolliger’s paintings are built up, flattened and smoothed out. “Using an acrylic medium”, she explains, “I build up the structure of the painting, layer by layer, moving paints across the surface. Further applications of colour and glazes finally bring the painting to the place I’ve been looking for.”

Pink is a new addition to Bolliger’s restrained pallet. In ‘Very Early’, finger-like tree trunks are rendered in varying hues of pink that distort into abstraction, either reflecting in water or are viewed below the root-structure. ‘Deep Discovery’ shows a blush-tinted botanical figuration alone in an esoteric locale.

Bolliger’s imagined worlds could be pre or post human. In Life. Forms, humans are not present and we are brought to awareness, through this work, that we are not the only living entities of significance and consideration in the cosmos.

Bringing another dimension to Life. Forms is Donna Cochrane’s basketry. Responding and relating to formations within Chintan Bolliger’s work, Cochrane has created orb-like shapes, using natural materials in varying sizes. This combination of physical and imagined realms by both artists conveys an alternative natural order.